India is home to some of the most beautiful architecture in the world. The country is considered a major travel destination due to the beautiful sights and historical landmarks that it has to offer.

Although India has more historic landmarks, a few natural landmarks are definitely worth the interest. Now let’s break down the most famous landmarks in India.

Looking for more famous landmarks around the world? Check out all our articles here, or start with these posts:

India has a blended architecture style due to the diversity of religions and the history of foreign influence. India’s associated diversity and foreign impact has led to some beautiful works of art.

The Taj Mahal is likely the most famous landmark in India. Many people believe the Taj Mahal to be only a palace, but it is also a mausoleum. A mausoleum is a type of monumental tomb or burial chamber.

The Taj Mahal is constructed with white marble and is located on the bank of the Yamuna River in the city of Agra.

In 1632, the Mughal emperor Shah Jahan ordered construction to begin on the Taj Mahal as a monument to his wife who passed away. The landmark was fully constructed in 1648. Some additions were made later such as a guest house, a mosque, and an outer courtyard.

One fascinating fact about the Taj Mahal is that it is a perfectly symmetrical building with the tomb as the central axis of the structure.

The Amber Fort was built in the city of Amer under the rule of Raja Man Singh. The title of “Raja” in India is a royal moniker equivalent to a king.

Amber Fort’s architecture is considered a blend of Hindu and Mughal building styles. The palace is incredibly opulent, with intricate carvings, inlaid gemstones, and gold accents covering nearly every inch of the structure.

Construction of the palace began in 1592, and the structure was the primary residence for the Maharajas and their families. “Maharaja” is a royal title meaning “great king.”

Amber Fort overlooks the Maota Lake and sits on a large hill. Following the palace’s initial construction in 1592, various additions and improvements were made by the other Maharajas over the next 150 years.

Qutub Minar is considered the “Pride of Delhi” and is a minaret or “prayer tower.” Minarets are typically attached to or flanked by a mosque, but the Qutub Minar stands alone, which is more common in India as the tower was considered a marvel of architecture separate from the mosque.

The tower displays intricate stonework with various geometric patterns and others seen in Islamic and South Asian culture.

The introduction of Middle Eastern architecture into India was relatively slow, so the Qutub Minar is seen as a beautiful blend of the two cultures that came about fairly naturally.

India famously has hundreds of temples, but the Temples of Khajuraho are one of the most interesting both in their design and history.

These landmarks are a mixture of Hindu and Jain temples located in the Chhatarpur district in the state of Madhya Pradesh. Jain here refers to Jainism or Jain Dharma, an ancient Indian religion that is one of the oldest religions that remains in practice today.

The majority of the temples were built in the “Nagara” style of Hindu temples. Stone carvings within the temple portray the legends of Hindu deities, many of them being fairly explicit in nature!

The Temples of Khajuraho were built between 885 and 1050 during the reign of the Chandela dynasty.

Hawa Mahal is also known as the “Palace of Winds” and is located in the city of Jaipur. Hawa Mahal is very close to the “City Palace” of Jaipur, which was built at the formation of Jaipur as a city.

The Hawa Mahal was constructed by order of Maharaja Sawai Pratap Singh, who is the grandson of the founder of the city of Jaipur. The palace was built in 1799, and its ornate facade was to imitate the pattern of a honeycomb.

The purpose of the building was to allow royal ladies to observe city events and the daily life of people through the latticed windows. These royal ladies were now allowed to show their faces to the public.

Hawa Mahal is known as the Palace of Winds because of its unique architecture, which allows cool air to cycle through the building during the warm months.

Though the historic landmarks of India are often more well-known, the conservation efforts in India have helped preserve some thrilling natural landmarks as well.

The National Park is host to many of India’s interesting native species, such as Bengal Tigers, White Tigers, and Indian Elephants.

The Periyar Lake runs through the park, and visitors can take boat cruises. These boat cruises can give them beautiful scenery as well as glimpses of the wildlife.

The Periyar National Park also offers Jeep Safaris which can give visitors a closer look at the diverse animal life present.

Swaraj Deep was formerly known as Havelock Island and is a large island located in the India union territory of Andaman and Nicobar Islands.

The island is famous for its white-sand beaches and clear, aqua-blue waters. The territory of Andaman and Nicobar Islands has recently pushed for Swaraj Deep to be a landmark of sustainable tourism.

There have been efforts to reduce the number of plastic waste tourists bring to the island, as the increased tourism has led to less manageable waste.

There are three main beaches located on the island that are very popular: Radhanagar Beach, Elephant Beach, and Kalapatthat Beach. These beaches are host to an active scuba diving community, which offers lessons and certification for visitors.

The Nohwet Living Root Bridge is a magnificent natural landmark located in Mawlynnong. A living root bridge is a bridge that forms out of natural living plant roots rather than a man-made bridge.

As long as the living root bridge is preserved and maintained, it can grow strong enough to support 50 or 100 people at once. The local community of Mawlynnong village ensures that the bridge is maintained, following their local traditions for its care.

The Nohwet Living Root Bridge is a popular natural landmark among tourists, especially as you can cross the bridge to visit the Mawlynnong waterfall close by.

The Mawlynnong Village is also nearby and has been awarded the title of “Cleanest Village in Asia” for many years now.

If you are hoping to learn more about India or possibly travel there, you will not be disappointed by the country’s gorgeous historical and natural landmarks. These are just a few of the most famous landmarks that can be found in India but are certainly some of the most popular. 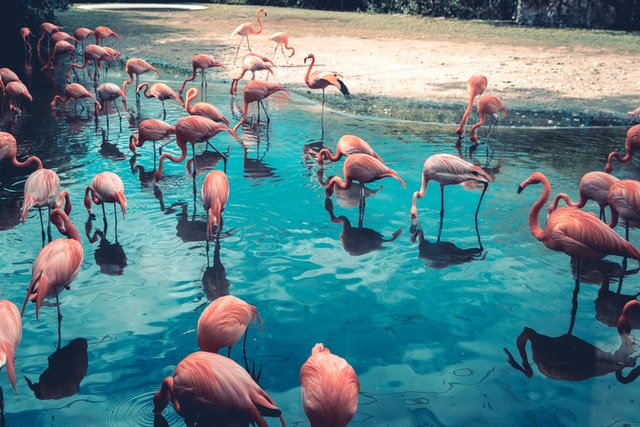